Today is the birthday party for my friend's daughter. Now, I've known about this party for several weeks and actually whipped out an Easel Birthday Trinket Box for her around the time I found out about the party. I also knew I wanted to make her a Name Frame, but I kept putting it off, thinking "Oh, I have several weeks to go so I'll work on it later." Well, guess who was up til 2:00am this morning working on that dog-gone Name Frame....yes, ME!

I finally got it done (through some sweat and tears, LOL)! I decided to use my first-ever Magnolia image that I bought online at www.magnoliastamps.us. Some of you may be asking....what's a Magnolia image? Well, they are just the cutest stamps ever! I must admit, when I first saw them they kinda freaked me out because they don't have a nose or mouth. But the explanation for that is...Angels speak with their hearts so they don't need mouths.

After a while, I found them growing on me (or should I say growing in my heart) and I just had to start collecting them. Right now I don't have that many, but believe me I plan on buying a whole bunch of them, along with a lot more Copic markers! Here's a close up of my 60's Tilda (the pics are a little dark so I'm thinking a future purchase might include a photo light box): 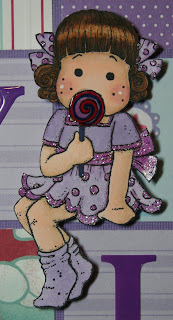 I also added glitter glue to the dots and trim of her dress and bows. I need to work on the whole light source thing and making areas lighter and darker to give it more dimension, but for my first Tilda, I didn't think it was too bad. 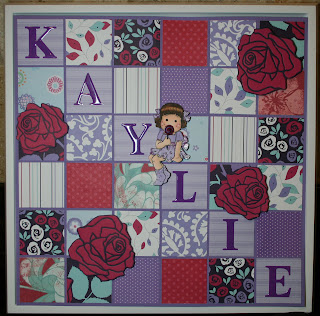 I used various squares of paper and aligned them up on a 12x12 piece of solid lavender cardstock. Unfortunately, I cut most of this paper into squares a while back and now can't remember who manufactured the various sheets of paper. I used pop-dot to raise up the roses and Tilda to give it more dimension. The sticker letters are made by Paper Studio and called Bubble-A-Bilities.

Following are pictures of the Easel Birthday Trinket Box. I found the tutorial on splitcoaststampers.com when I did a search for Easel Cards. You can find the link here. Keep in mind that at the time I made this, I didn't have any Magnolia stamps, otherwise, I would have used one. The image is called Megan and is from The Greeting Farm.

The dangling charm...is actually a shrinky dink (do you remember this stuff as kids??). Well, it's available at craft stores and I love it! I make all sorts of charms, necklaces, bracelets, etc. with this stuff. It's awesome!! 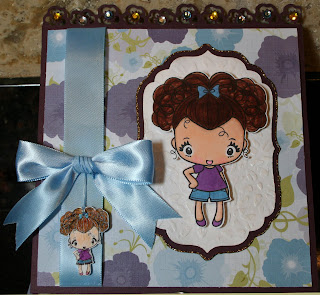 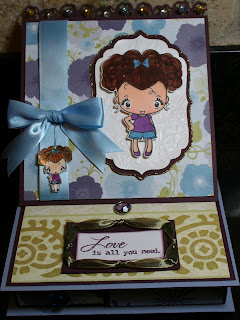 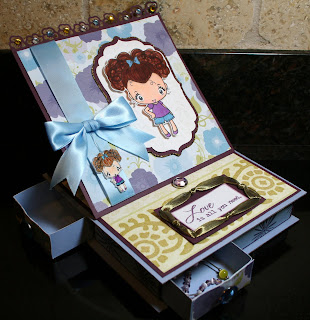 Well, I'm off to bed now! I hope you enjoyed my first ever Magnolia creation!

Much love to all of you!
Rosemary
Posted by Rosie at 1:49 AM

Oh my goodness... That card is just cute. I think you did very well with your first Magnolia stamp. Keep up the good work.

You did a awesome job coloring your Tilda and she is adorable sitting on the quilt block!
Hugs,
Nancy

Aw, so cute! She is going to love it! You sure put a lot of workng into that, and I love your colouring!

Fabulous job on both of your projects! Awesome coloring and your Easel gift box is soooooo precious! Wonderful job...

Great job on your first Tilda. I love the colors and the details.
Hugs,
Shell

Super job on both card and trinket box! I love them!!! I see lots of GREAT potential as you continue coloring with your copics. I already like what you've done : )
Love and hugs ~ Lori

Both of these are beautiful creations. Cute & sweet!
Hugs,
Cabio 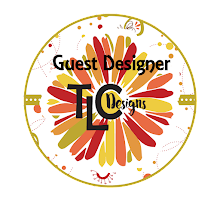